One way to think of Wohoon is: Gamma World rewritten as weird fantasy rather than a science fantasy setting. Admittedly that's a fine and perhaps spurious distinction. Like Gamma World Wohoon is post-apocalyptic. There will be robots and rayguns and possibly  probably definitely giant radioactive monsters rising from the depths to occasionally stomp across the landscape. There will be mutants, and how.

But in essence it's a fantasy world. Hobbs, elves and dwarfs, goblins, ghouls and giants, the whole schmeer. It's just that it takes place after your basic act of magical hubris blasted the best part of civilization into rubble and splinters. The hills are alive -- in some cases quite literally -- with wild magic. Whole forests are twisted by polymorphic radiation into impossible shapes, ogrish trees with beards of jangling glass and leaves of paper.

Time is broken too. The cataclysm that doomed Wohoon was caused by a cabal of chronomancers, believed to have been flung far into the future, and worshipped by furtive cults as the Gods Yet to Come. In some places time spins backward, or loops upon itself. Skyscrapers and clocktowers rise up from the shallow waters of the Sea of Clocks. The lost objects of a thousand worlds and ten thousand generations accumulate in a junkyard somewhere south. Folk from other times are drawn here as well: lost zeppelineers, dinosaur herders, mad scientists. Undeath is chronomantical in nature, a generally foul attempt to thwart the proper passage of time.

I'm already well past 25 words and the edge of coherence, but here's a few more, in the sentenceless manner Noisms suggests:

Wohoon, in less than 10 words

Thundarr the Barbarian, with backgrounds drawn by Salvador Dali.

There are a lot of great settings being cooked up at the moment: Thool, Athanor, The Valley of Blue Snails, Yoon-Suin, Cinder. If you're working on one, I'd love to hear a summary in 25 words or less (And please post a link if you've got someplace online where you go on and on about it!).
Posted by Max at 7:59 AM 30 comments: 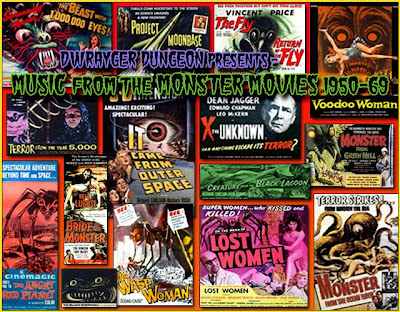 Jeff Rients asked in the comments of a recent post, "Were you this manic before Encounter Critical?"

By way of evidence, two pages from a sixth grade school project: Email ThisBlogThis!Share to TwitterShare to FacebookShare to Pinterest
Labels: juvenalia

"It comes from the Greek word for giant"

One of my favorite remembrances of Gary Gygax is this one at The Onion's pop culture site, the AV Club. Like the author I was one of the lonely thousands of kids for whom D&D was a mostly solitary escape. He captures the mix of gladness and melancholy I feel remembering the many hours I spent reading and re-reading the DMG and running Keep on the Borderlands as a solo adventure.

I was surprised at how much Gary's death affected me. I'd collected some 3rd Edition books, but I hadn't actually played D&D or any other role-playing game more than once in eighteen years. And while I had come to see how warm and generous Gary could be with his fans and admirers, I never met him, nor even interacted with him in one of the various online forums he visited. But the news stung. And more than that, it was a memento mori: the mysterious and distant oracle of my youth, the sage and scholar whose work I annotated, was simply a man, and was gone.

That's when I resolved to turn my lifelong, if intermittent, love for D&D and other games into something more than a solitary pursuit -- a few weeks later I started this blog, a month later I played in a pick-up game. Now I'm playing once or twice a week and hoping to run a Basic/Labyrinth Lord game at the local D&D meet-up. I have Gary to thank for that.
Posted by Max at 9:36 PM No comments:

Rumors overheard by players in my Encounter Critical game: