Their Own Weird Language

Mysteries of consciousness, sentience, and language.

Algoid: "[A] colony of algae which, assembled in [humanoid] form, has developed...a rudimentary intelligence."

Apsis: "Apsis drones speak their own language and 5% will be able to speak Common. They do not have a written language per se but may communicate by using subtle scents and perfumes."

Babbler: "The babbler communicates with a kind of quasi-lingual babbling tongue which defies efforts at analysis and learning by humans. It can understand the common tongue in a rudimentary fashion."

Bat (Mobat): "These monsters have a dim, evil intelligence and a desire for shiny objects."

Bodak: "They speak the tongue of demons and demonic creatures well but remember few words of human speech."

Bonesnapper: "Though non-intelligent, the bonesnapper has inherited a primeval instinct for the collection of human bones, particularly jawbones, which it uses to decorate its subterranean lair. The number of such bones discovered in a lair will give a good indication of its status among its kind."

Boring Beetle: "These creatures are individually not of much greater intelligence than others of their kind, but it is rumored that groups develop a communal intelligence which generates a level of consciousness and reasoning ability approximating that of the human brain."

Blink Dogs: "These brown and yellowish creatures are as intelligent as normal humans and have a fairly complex language consisting of barks, yaps, whines, and growls.

Carnivorous Apes: "The beast has fair intelligence (IQ 70+) and is very cunning." Elsewhere, it is noted that hobgoblins "speak the rudimentary tongue of carnivorous apes."

Cloaker: "Though they are highly intelligent, their thought processes are alien to most races and usually only magic-users are able to communicate with them."

Dark Creeper: Their "language [is] incomprehensible to linguists."

Dire Corby: "They have rudimentary language (their attack cry can be recognised as 'Doom! Doom!' by those familiar with it)."

Dolphin: No mention of language but it seems assumed. They are Very Intelligent, lawful good, and some live in communities and keep swordfish or narwhals as guard animals and pets.
(Rules Compendium): Dolphins "have their own high-pitched language. They can communicate telepathically with other dolphins within 50 miles..."

Dragonnel: "These creatures have a dim intelligence and have been known to perform evil deeds at times."

Fire Toad: No mention of language or social organization but has Low intelligence (5-7) and will usually only attack if "threatened, molested or in defense of its treasure."

Fungoid Minds: The ascomid, basidirond, phycomid, ustilagor, and zygom are each given an "Unratable" Intelligence in their stat blocks. "Ustilagors have no intelligence or mind as defined by human standards, so mental attacks do not affect them. These monsters do, however, have some form of brain, for they have psionic powers."

Giant Beaver: "Giant beavers sometimes trade, and if coins or other valuables are offered they can sometimes be persuaded to undertake the building of dam-like constructions if there is water near the work site, for they use such water to work in/from."

Giant Eagle: "They have their own language and can also communicate through a limited form of telepathy."

Giant Harvester Termite: "Communications between giant termites are usually accomplished by touching of the antennae. In crisis situations, a broadcast telepathic call is sent out."

Giant Owl: "Giant owls speak their own language,...are intelligent and will sometimes befriend other creatures."

Gibberlings: "Though they clearly have a primitive means of communicating among themselves, they have no discernable language."

Gorbel: Despite being listed as Non-Intelligent, gorbels have personalities – "mischievous, fickle and irritable."

Gray Ooze: "In exceptionally large individuals intelligence of a sort is well developed."

Grig: "[T]hey speak Common as well if they choose to slow their speech and pitch it downwards in scale."
Quickling: "Most can speak many words of Common, although at a high pitch and too quickly to be easily understood."

Hangman Tree: "A [hangman tree] can speak haltingly in Common learned over the years." (Learned from its victims? Like a parrot? *Tree voice* "Creaak! Help! Help! Creak! Chop it down!")

Harpy: "They speak their own language and none other."

Hook Horror: "A hook horror cannot speak but communicates with others of its kind by making clacking noises with the exoskeleton – an eerie sound which can alarm the unwary as it echoes around dungeon corridors"

Ibathene (Arduin): "They are so stupid they sometimes fight on even after killed (1-20 turns, roll) because they don't know they're dead!"

Ice Toad: "The ice toads have their own weird language."

Juju Zombie: "A hateful light burns in the monster's eyes, as it realizes its condition and wishes to destroy living things."

Kuo-Toa: "[T]hey speak their own arcane tongue and can communicate with most fish by empathic means."

Manster (Arduin): "They're essentially free-willed flesh golems but must imbibe at least four quarts of human blood each day in order to keep functioning with free will." That right there is pretty messed up. Blood as consciousness? Could that be how vampires keep their freshly turned thralls subservient, by not feeding them enough to regain the free will they had while living?

Mimic: "The killer mimics do not speak, but the other [smaller] breeds have their own language and can usually speak several other tongues such as common, orcish, etc. For consideration they will usually tell a party about what they have seen nearby."

Mind Flayer: "These monsters speak only their own arcane language and several other weird tongues — purportedly those of terrible races of things which dwell in regions of the subterranean world far deeper than mankind has ever ventured."

Muckdwellers: "These monsters speak their own croaking-hissing tongue and possibly that of lizard men."

Mustard Jelly: Has an Average Intelligence per its stat block, and is described as "not unintelligent, [but] not known to value treasure of any sort." The ascetic philosophers of the jellies and slimes, given to contemplation when not seeping about in dungeons in search of prey?

Otyugh and Neo-Otyugh: "Otyugh speak their own language and are semi-telepathic, thus often able to communicate with other life forms when the otyugh so desire." The neo-otyugh "are slightly better at telepathic communication."

Raven (and Crow): "Ravens and crows have their own, limited language" of "raucous calls and, possibly, movements as well." "Certain ravens, including some huge and most giant specimens, can speak as many as 100 words of the common tongue and can communicate in meaningful phrases. Huge ravens tend toward a malicious disposition and are known to serve evil masters when opportunity permits."

Slime Creature: "The vegetable intelligence of slime creatures is of animal nature, but their cunning enables them to learn from experience. They can also use their cunning to lay traps. Slime creatures have limited telepathic communication with their own kind effective in a radius of up to 20"." What's that again? A vegetable intelligence of animal nature? Slime creatures are the originally humanoid or animal hosts for colonies of olive slime, so perhaps their brains survive, neurons and synapses overgrown with slime tendrils. Or perhaps this is just a case of it being awkward to edit the boss of the company for clarity.

Sussurus: "Though it has no language as such, a sussurus communicates with others of its kind by slight and subtle variation in the dronesong; however it is only very rarely that two sussuri are close enough together to communicate in this way."

Tasloi: "Tasloi speak their own language and can also speak the languages of monkeys and apes....Often they can be heard at night, speaking in their high and whispery voices."

Trapper and Miner: Each of these ambush hunters is listed as "Highly" Intelligent in its stat block. Maybe they're somehow related to the cloakers.

Vegepygmy: "Although they do not have a spoken language, they are capable of vocalized cries. Their major form of communication is a code of chest slappings and thumpings."

Worg ("neo-dire wolf"): "These creatures have a language..."
Winter Wolf: "They have their own language and can also converse with worgs."

Xaren: "Xaren speak a bizarre tongue but telepathy or knowledge of tongues can aid one in understanding them."

Yellow Mold: "When formed into great colonies of at least 300 square feet in area this growth will form a collective intelligence about 1 time in 6." 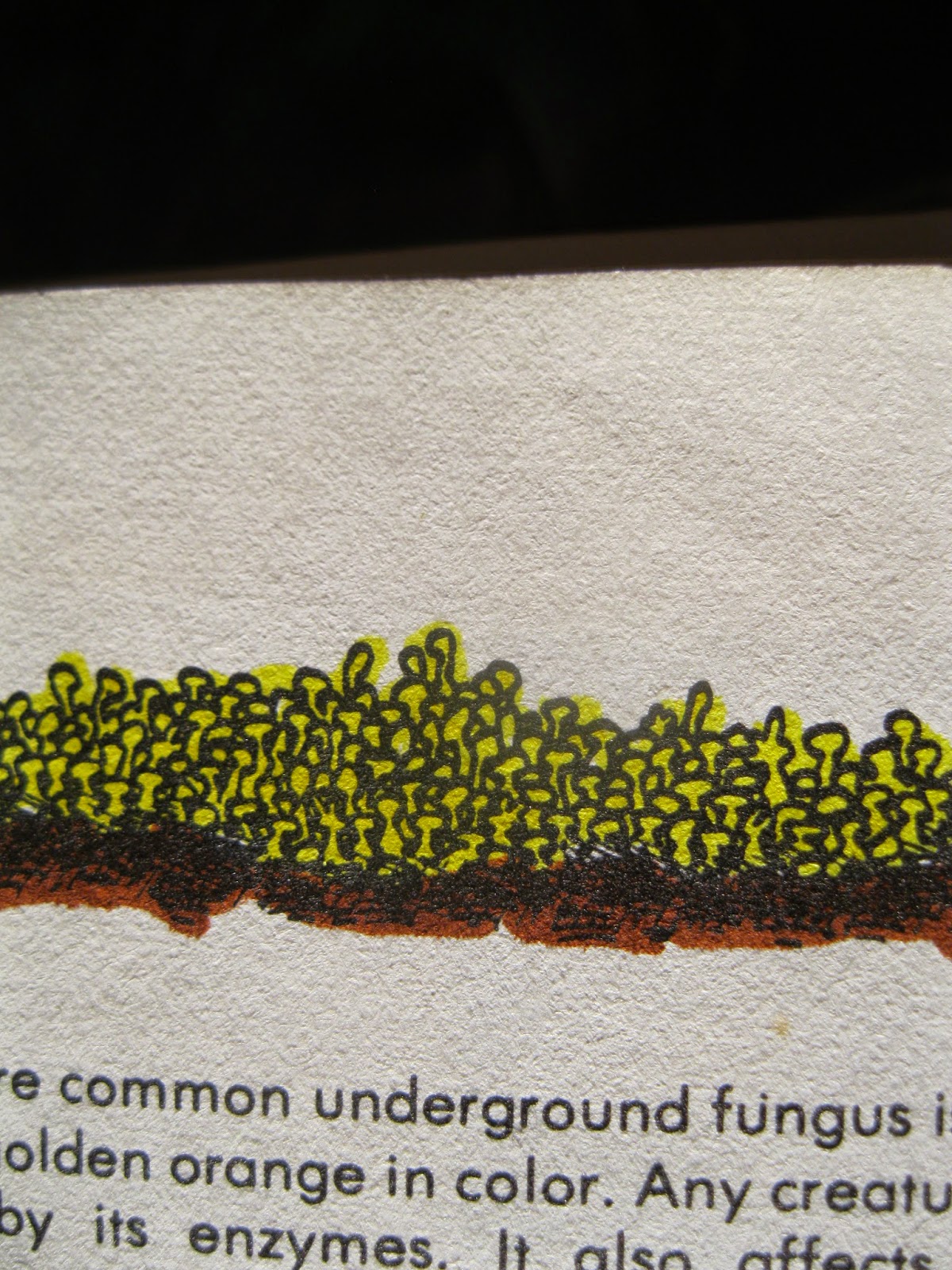 (All quotations from the AD&D Monster Manual, Fiend Folio, and Monster Manual II, the Arduin Grimoires Volumes 1 and 2 and the Rules Compendium. Babbler by Russ Nicholson, Yellow Mold unsigned but looks like David A. Trampier, both colored by Max the Younger; Cloaker by Erol Otus.)