Now, when you least expect it, Tirapheg Week!

Fittingly enough given the non-sequential progress of tirapheg week, a being from beyond space and time! Statted up for Labyrinth Lord, with a dash of the epic pseudonatural template from 3rd Edition D&D. Previous installments of tirapheg week are here.

Triskelion is a wizard-scientist of unknown origin. It travels the astral in a demi-planar orb several hundred feet in diameter, just large enough to contain its manse and laboratory. Though it is not exactly evil, its philosophy and ethos is utterly alien, and it values other life forms only as subjects for study. It collects all manner of creatures for examination, often suspending them in temporal stasis and creating clones as needed for dissection and magical experiment.

Although humanoid Triskelion's appearance is bizarre, with three heads, three arms, and three legs. Its heads are featureless, save for a ring of faceted eyes encircling the central head. Its arms are thin and double-jointed, ending in long, bony fingers; the two arms at the shoulders are fully mobile to the creature's front and rear alike. The outer legs end in rounded stumps, leaving Triskelion to balance on the three splayed toes of its central leg.

Strange though Triskelion's typical form may be, its true extra-dimensional form is far more terrible. When threatened its eyes shine with sickly light and its arms and fingers seem to bifurcate, splitting like bony branches. Its body seems to grow and shrink, stretching and receding into the distance or looming till it appears only inches away; this disorienting effect gives it an effective AC of 2. Worst of all, a huge circular maw gapes open in the creature's belly, revealing a black and starry void. On the round of its transformation, all those who gaze into this void must save against spells or be feebleminded.

Though Triskelion can attack with its bony claws up to 6 times per round in its true form, it casts spells as an 18th level magic-user so it is unlikely to melee unless hard pressed. Its spellbooks include several unique incantations, two of which are detailed below. In addition it can use ESP and comprehend languages at will and once per day an improved form of mirror image which creates from 2-8 images, each of which takes 8 hp of damage before being dispelled.

This spell summons a wall of bubbling primal chaos into being, a writhing protoplasmic mass that takes a shape of the caster's choosing to a maximum of 1,000 cubic feet. The wall may not be conjured to appear in space already occupied by other objects, and it must initially rest on a solid surface. However it can be directed by the caster to move at a rate of 60' per round and to change its dimensions as needed as long as they do not exceed the maximum.

The wall will lash out at any creature within 10' of it -- including the caster -- doing 2-12 hp of damage. Each 10 cubic feet of the wall is equal to a gelatinous cube for the purposes of attacks against it (i.e. AC 8, 4 HD, immune to cold & lightning, ability to engulf foes).

Casting this spell sends three miniature black holes hurtling toward the target, sucking at flesh and soul alike. On a successful save the target takes 8d6 damage. On a failed save the victim is torn to pieces by the gravo-magical maelstrom, his or her remains scattered in the astral plane. There is a 1% chance per character level or HD that the victim's soul survives intact; otherwise it is sundered and lost forever.

A wrestler's greatest ability is his or her Finisher skill. This is a special attack percentile for the wrestler's signature move, such as a spinning back fist, pile driver, leaping flip kick and so on. (The wrestler character should create a unique name for each Finisher move.) If successful the Finisher attack scores double damage, but if it misses the wrestler loses his or her next attack. Finisher chances are 30% at first level and increase by 5% per level thereafter.
Posted by Max at 11:24 PM 4 comments: 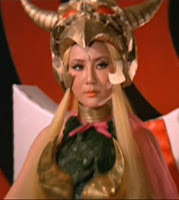