Wandering Monsters are Chief Among the Hazards of Dungeon Mapping

Successful parley!
Posted by Max at 7:58 AM 3 comments:

Throwing Myself Off the Bridge

Basic D&D at the Milwaukee D&D Meet Up 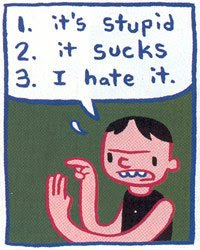 Yesterday I ran my first face-to-face game in twenty years. After a year of solo tinkering and playing in other people's games I wanted to take my own turn behind the screen. Of course immediately after the Meet Up was announced I started wondering what the hell I was thinking. I had a low level case of nerves most of last week, and in my typical procrastinative fashion I was still keying the last few rooms of the dungeon an hour and a half before game time. As I left for our venue I was downright jittery: What if I stink? Will they think Basic is lame? Will I fail to advance the glorious Old School Revolution? What if I forget to wear pants?

Despite my worries I think the day went smashingly! I had a blast, and from what I could tell the players did too. I had five players, with a wide range of ages and experience. Tony and I have played 3.5 before; Joe runs Fourth Edition games; Andy and Mark are younger guys who'd played D&D Minis but not much tabletop roleplaying; and Keith is a gentleman of the old school, whose copy of the Rules Compendium I was sorely tempted to purloin.

We started off with character generation, using a handy four page handout I repurposed from Jeff Rients' Big Stupid Dungeon Party, and ended up with a cleric, two dwarfs, an elf and One Thumb the halfling. The players seemed to catch the spirit of exploration from the start, with a good balance of cautious dungeoneering and kick-in-the-door impulsiveness.

They were exploring the site of an (apparently) abandoned archaeological dig, a partially excavated temple complex somehow buried whole in solid rock. When they found an exposed section of the temple wall, a sixty foot stretch of black stone covered in rusted cogs and gears, they were immediately determined to find the way in. This soon led to the first party death. They dropped a torch into a chasm hoping to gauge its depth, disturbing the amphisbaenopede dwelling there, which dragged the hapless cleric Liam McKinley to his demise. I almost wished he'd failed his saving throw versus death instead of being eaten alive. The party considered a few plans to rescue him, but -- ooh, shiny -- got distracted by the gems embedded in the temple wall and commenced to looting instead.

The party's other adventures included a battle with giant mutant kangaroo rats, a conversation with a demented cave hobbit, and the discovery of a strange metal mask which Ammo the Dwarf declined to put on despite the taunting of his fellow PCs. Luckily enough the session ended with a big fight between a weird old wizard and his goons. I expected this to turn into a parley, but with a lucky shot Aedar the Elf popped an arrow through the wizard's Shield spell, and the mayhem was on. The party ended up fighting a desperate but doomed battle against a dozen twisted orcs made of clay and fungus while the wizard hid himself.

Only One Thumb survived the melee, holed up in the wizard's cave twenty feet up the cavern wall. He watched for hours, hoping to finish the wizard off with a sling bullet, or to lure him back up to the cave where he'd laid a trap made from bedding doused in oil. Alas, the halfling waited long enough for the wizard to rehearse Charm Person, and missed his sling shot when the magician stepped out to cast it. One Thumb failed to resist the spell, and there we draw the curtain, leaving the game's only survivor to an uncertain future.

All in all things went well, and as I say I had a blast! There were a few things I'll need to improve for future games:
All in all, phew, I'm relieved. Having a successful first session under my belt gives me a lot of confidence. I hope to run more games at the Meet Up, and maybe give a go at running an open campaign. 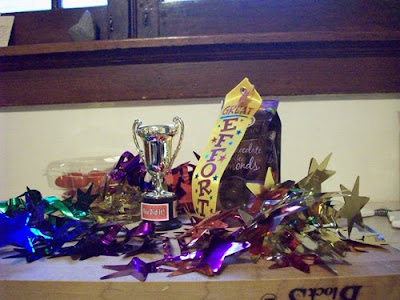 Special thanks to my wife, who's been incredibly encouraging. See? I even won a prize!
Posted by Max at 2:39 PM 6 comments: 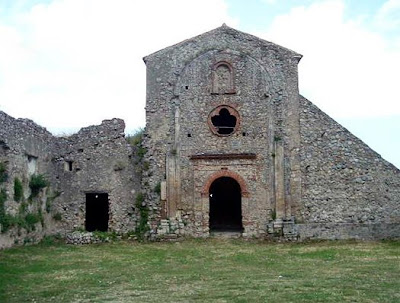 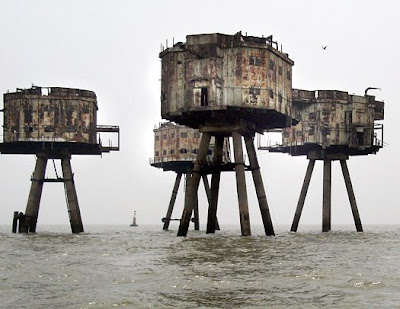 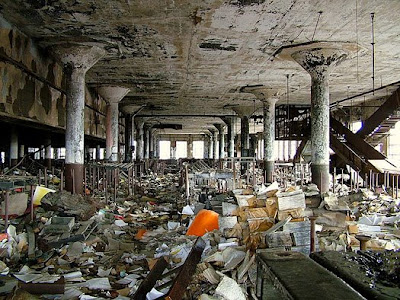 Inspirational images from the series Abandoned Places, courtesy the fascinating (and marvelously named) photo blog If Charlie Parker Were a Gunslinger, There'd be a Whole Lot of Dead Copycats.
Posted by Max at 12:16 PM 2 comments:

I don't celebrate Easter. My wife and I aren't churchgoers, and we don't have any family in town, so it's a quiet Sunday like most. In a few minutes I'll call my folks and cook up some turkey & chorizo picadillo, and later on I'll head out for the weekly D&D game.

But between baskets of candy and egg hunts on the news one can't help noticing it's Easter weekend, and at the gym this morning I got to thinking about two songs with Easter themes.

The first is Agalloch's "Kneel to the Cross," a cover of an anti-Christian screed by pagan neo-folkers Sol Invictus. I haven't much sympathy for the song's point of view: I'm no expert in Nietzsche, but I'm pretty sure this is what he smells like packed into a bong and passed around the dorm room. The one line that pricks up my ears is "It's love your neighbor and rattle your saber," which neatly sums up how I feel when a certain sort of believer offers fellowship with one hand while waving a hellfire brand with the other.

What keeps me coming back to the song is the chant at the beginning and end, "Summer is a-coming in, arise, arise." I have no idea how deep the fellows in Agalloch meant that allusion to be. Quite probably they go no further back than Wicker Man (spoiler alert -- 35 year old film or not it's worth seeing fresh). But beyond that stretches hundreds of years of folk song in British Isles and the Americas, both sacred and secular, Christian and pagan. It's both "Perspice Christicola" and "Sumer is Icumen In."

So while the branch may bitter the song has deep roots, whether its planters know or not. And for my part I am ready for summer to arise, to whistle up spring from deep roots and send it out to green the grass and bud the trees.

The other song could hardly be less like Agalloch's solemn anti-hymn, though it is irreverent in its own way. In addition to colored eggs and fluffy bunnies Easter weekend is the time for an annual viewing of The Ten Commandments in our household and millions of others in the US. Judging from the song "Charlton Heston" Cecil B DeMille's epic reached a few homes in Ireland and England as well.

I'd hardly knock The Ten Commandments. It's got drama, intrigue, vistas of sweeping grandeur, visions of ghostly green horror. I'm not unmoved by Yul Brynner's hard-hearted scheming and envy, nor by Charlton Heston's manly reverence and woolly white beard-wig. But mostly I like the outrageously vampy way Anne Baxter pants "Moses" whenever she and Charlton are alone. Consequently I don't have the patience for a full viewing, but I can always spare three and a half minutes for Stump's clever gloss on the movie, corny jokes and all: "Boils the size of 50p / Lights! Camel! Action! / Bushes that refuse to burn / See these sandals hardly worn / Raining blood and raining bread / The night we painted Egypt red."

May Easter and spring bring joy.

MP3: Agalloch, Kneel to the Cross (from the out of print EP Of Stone, Wind & Pillor. Agalloch's other records are available on compact disc and download)

Here's a chart for Encounter Critical. Sufficient unto the day is the folly thereof.

If a Warlock or Mad Scientist is exceptionally successful when using the Conjure ability the following chart may be consulted. Note that Conjure only summons the creature or creatures. The spell Demon Master or the Monster Friend, Machine Friend or Seduction abilities may be required to control the summoned being(s).
Inspired by Jeff Rients.

SEE ALSO: Discovered on the Phantasm website, further evidence of my theory that Don Coscarelli plays Encounter Critical: the Regman Quad-Barrel Dwarfcutter. The gun's going onto my EC weapons chart and the name's going into my NPC rogues gallery.

MP3: Sparks - Eaten By the Monster of Love (Compact Disc - Download)
Posted by Max at 11:28 PM No comments: