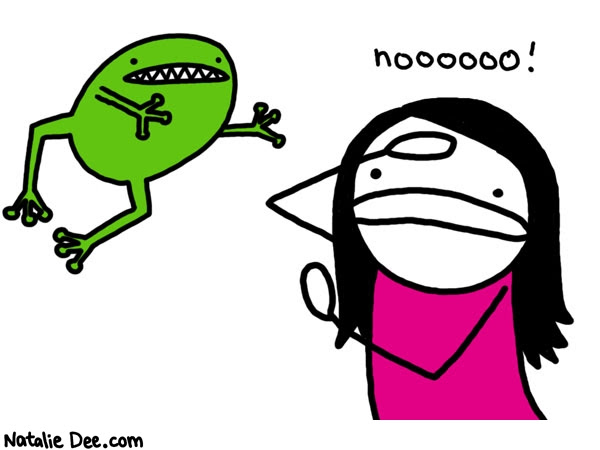 When he wasn't pretending to pop out an eyeball and eat it, my dad used to recite, in tones of solemn gravitas belied by the glee in his eyes, the following poem:

So if I grew up warped it was nurture, not nature.

10. Firetoad It's a giant toad that spits fireballs. Pedestrian.

8. Grippli Tree frog men, because D&D never tires of piling on more intelligent humanoids! I mix these guys up in my head with the fiddling grigs featured on the same page of the Monster Manual II, resulting in musical frogs whose piping song lulls and confuses travelers.

7. Muckdweller It's a salamander that squirts a blinding stream of muddy water. Pah-tooey! They are lawful evil, and sometimes consort with generally neutral lizard men. I imagine them as sinister tempters, encouraging the lizard men's hunger for human flesh...

6. Type II Demon (Hezrou) The toad demon is iconic to be sure, but it’s nowhere near as memorable as Types I and III-VI. It lacks pizazz.

5. Ice Toad I was ready to plunk these down at 9 or so: giant toad, blast of cold, OK, OK. But what’s this? "The ice toads have their own weird language?" Now I wonder what they’re up to, croaking and ribbiting in the eldritch glow of the northern lights...

4. Killer Frog Froggie went a killin’ and he did ride, hey hey. And, please note, they are "specially bred mutants. Only their cannibalistic habits keep them from becoming common and thus a real threat."

3. Bullywug It’s the name, really. Say it out loud three or four times and it’ll have you grinning. It’s like a novelty song from the 50s. At the same time, imagine the fracas a squad of these guys could cause, marching out of a bog in a frigging frog phalanx, with spearmen hopping over the shield wall to attack the party’s backline. Not the Hully Gully, not the Frug – good golly it’s the Bullywug!

2. Slaad The slaadi might make it onto my actual, not joking around top ten monster list. When I write that up maybe I’ll have something more intellectual to say. But honestly, one reason why I liked them so much as a kid? They’re freaky froggin’ bad asses! Spell abilities out the croakhole! Two-handed magic swords! One of them lays eggs in you! One of them has claws like Wolverine!

1. Froghemoth The slaadi might have the real ultimate power of the toad monster world, but the froghemoth has Zowie. Gygaxian naturalism is a beautiful thing, to be sure. But sometimes you have to tell naturalism of any stripe to take a flying leap into the phantasmagorical, as Gygax himself demonstrated with this beautiful monstrosity.
Posted by Max at 4:10 PM 5 comments:

After a good six-seven month run I just ended my online Encounter Critical game, God City Sandbox. Play by post games are fueled by enthusiasm and attention, and the game seems to have run out of steam the last few weeks. With a couple players incommunicado my own enthusiasm sorta fizzled too, and I let the game drift off into the phasic sunset. So it goes.

Don't worry, I'm not gonna get all weepy. I had a damn good time while it lasted! Here are my favorite bits:
In retrospect the I let the Brawl drag on too long. It could've been done in a single session face to face, but it was probably too much of a grind for online. I made it clear from the start that they could quit the Brawl at any time, but I could have reminded them here and there as things wore on. In any case, I loved running for all of the players who visited my version of Vanth. Hope they had as much fun as I did!

SEE ALSO: All of the play threads are archived at the God City Sandbox blog, for any as like to read game logs.
Posted by Max at 12:14 AM 5 comments:

Friday before last I packed my bags, filled up a 30-count box with CDs (my iPod battery being drainsville), and motored south to Champaign-Urbana for Winter War 36. Here's how it went down.

First thing Friday night was Jeff's Encounter Critical game. He's already given the lowdown on our escape from Planet Gamma via a Left Turn at Alba-Quirky, which most people reading this have already read. I've run EC, at least as a play-by-post, but never had a chance to play. It was a hoot. Jeff didn't hand out any XP, but my PC Zeerok almost certainly gained enough for a level, what with (unsuccessfully) Reading the Mind of a dead snake person by popping its skull and poking its brain, getting the handy (ahem) mutation of telescoping arms and discovering a cure for space zombie contamination. It's too bad a few of the players seemed more interested in hanging out with their (non-playing) pals. I mean, this was a game where we slipped a mutant house-plant a mickey, flew a rocket into orbit and hot-wired a lunar rover. So their loss, obviously.

On Saturday morning I played something new for me, Cartoon Action Hour by Spectrum Games, a game that emulates the classic action-adventure cartoons of the 80s. The event was pitched as post-apocalyptic cowboys: good enough to lure me in! CAH turned out to be very fast-paced and rules light, and the cartoon-inspired setting made for a great mix of wild action and meta-game humor about commercial breaks and Action Playsets. Royce Thigpen's scenario Waste Riders was great fun. We battled our recurring foes the Ant-People and their King, had a shoot-out on horseback while chasing a Mack truck loaded with kidnapped townsfolk, and trojan-horsed our way into our nemesis Black Bart's supermarket fortress to battle his giant cyborg. What's not to love?

Up next was Matthew 'Alex' Riedel's Arcane Vault of the Magic Goddess, a 1e game featuring a buried temple to Isis and some great tricks and traps in the vein of the classic tournament modules. I can easily imagine Dave Sutherland illustrations of our hapless thief getting stuck to the wall of a magnetized pit, torched by a flame trap and, fatally, squashed by a golem! We players did more dithering than delving, and consequently didn't get to explore too much of the Vault itself. Happily, it was a runner up in last summer's Fight On! / Otherworld Miniatures adventure contest, so I'll be able to read the rest when FO #4 is published. Mike 'Chgowiz' Shorten has more on the session here.

Speaking of Cha-gow-izz (the cognoscenti say "Chicago Wiz"), he and Alex Riedel switched places for Mike's Sunday AM game, A Mob is a Terrible Thing. The moment our front line slipped down a greased slide and started getting pelted by rock throwing kobolds I had my suspicions that we'd come down with a case of Tucker's Complaint. Sure enough it was a running battle from then on, with kobolds lobbing flaming oil, rocks and javelins then running away before Alex's bloodthirsty dwarf could smash too many of them. Nothing but bad luck for my PCs: tripping and falling while chasing after a spooked henchman, trying and failing to catch a flaming gourd molotov, falling into a pit full of grey ooze, dying...

Mike's a very physical DM, on his feet for most of the session, and he pushed the pace by immediately responding to every spoken action -- unless we very clearly stated we were just planning, every damn thing that came out of our mouths was in play. Loads of low-down dirty high-adventure hijinks. Read more from Mike here and, hey, why not download the adventure for yourself?

A quick dash out for a sandwich and it was back to the table for Jeff Rients's Big Stoopid Dungeon Party. I believe that my thief LaQuinta was the first to die -- in hindsight grabbing the giant glowing ruby wasn't the smartest thing, but I had hopes of fencing it to my twin sister LaCinco. Ah well. My second character was a scholarly magic-user, who spent much of the adventure on donkey back, writing bad haiku during pitched battles and taking over mapping when our first cartographer perished. This was the limit of my usefulness since I'd prepared Read Languages and we discovered no ancient rebuses in need of decoding.

Jeff had a knack for catching individual player's voices out of a din of crosstalk and smart-assery, and a low key, almost deadpan style that worked really well with a table full of rambunctious gamers -- we didn't need any egging on to generate our own excitement. I can't imagine playing in a regular game with that many players, but as the giddy, goofy, edge-of-exhausted culmination of a con it was just about perfect.

With only a stop for coffee I was on the road and gone like a train. With just enough traffic to keep me alert and a Scandinavian audio-assist from Opeth, Robyn, and Finntroll, I was home by 10:30pm. WinterWar is a great convention. I had a fandamntastic time, and hope to make it down again next year.
Posted by Max at 1:42 PM 3 comments: