The fires raging over Geoffrey McKinney's Carcosa have mostly died out, aside from a few pyros still stoking flames here and there. I haven't yet gotten a copy myself, so I won't comment on its content aside from saying that the cool parts sound cool and the squicky parts sound squicky.

Part of my hesitation is indecision. I'm not sure which version to get. There's the original and its blasphemous rituals, as well as a forthcoming revision which redacts the grisly details of Carcosan sorcery. And just this morning I learned about yet another version:

A Bold New Take on the World of Carcosa

First came the controversial original. Then came The Expurgation. But now comes the most shocking Carcosa yet. Can you survive the horror, the madness, the hours of fun and laughter that is....

Carcosa Mad Libs
"Summon the Adjective Ones: This number-hour ritual can be completed only on a adjective related to weather night. The sorcerer must obtain the kind of food found only in ruined kind of shop, plural of the Snake-Men. The sacrifice is a noun number years old with noun. The sorcerer, after partaking of the kind of food, must verb the sacrifice number times, afterwards verb-ing it with its own noun. As it verb-s, 10-100 of the Adjective Ones will verb out of the mists."

(I accept all blame, but this post is probably where I got the idea.)

Email ThisBlogThis!Share to TwitterShare to FacebookShare to Pinterest
Labels: funny?, gaming, i am a terrible person, legacy DnD 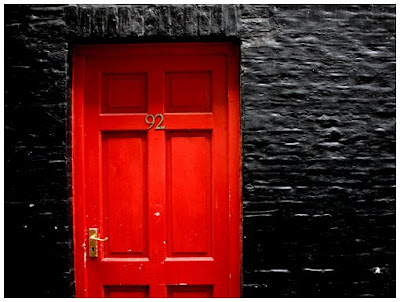 Hrvatski, Paint it Black (Painted Black Compact Disc - Hrvatski downloads)
One of 11 dead flowers on a Tumult Records compilation.
Posted by Max at 8:09 AM No comments:

Oh bleak branch and leaf in windy disjoinment
Sunday afternoon full of crows and disappointment
full of rattling twigs and clacking beaks
every window leaks
cold sunlight, slanting through the enjambment
a gritty balm for the wounds of the week 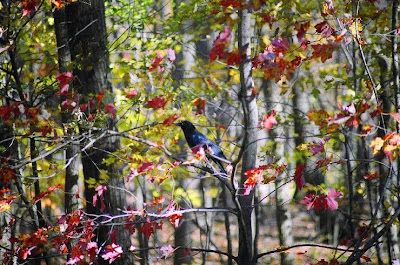 MP3: Tom Waits, Flash Pan Hunter/Intro & That's the Way (Compact Disc - Download)
A pair of songs from The Black Rider make the point with less fuss.
Posted by Max at 2:01 PM No comments: 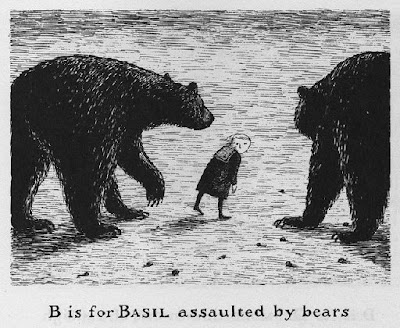 Not long ago, Reis at Geek Orthodox did a post featuring the classic cartoons and illustrations of Charles Addams. Perhaps less well known is another macabre humorist, the writer and illustrator Edward Gorey.

Here are a few of his moody and mordantly funny illustrations, followed by one of his poems adapted by the eccentric cabaret act The Tiger Lillies. 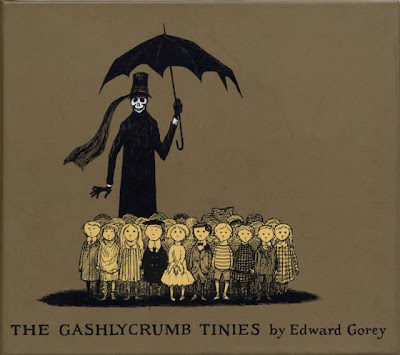 WHY DID I NOT GET THE MEMO DEPT: The Tiger Lillies meet Alexander Hacke of Einsturzende Neubaten for a Lovecraft tribute? Man what?

It's a bit florid, but I really love this arrangement of "Transylvanian Lullaby" from Young Frankenstein. "Haunting" is high on my list of words that should be permanently retired from music writing -- cf. "angular," "Dylanesque," and, ugh, "soundscapes" -- but is this melody, so lyrical and longing that it lures the monster from its bride-to-be, anything but? 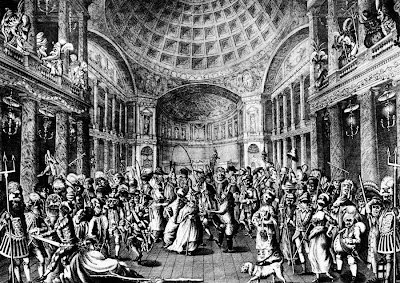 The masque spell gives all creatures within the area of effect a grotesque, mask-like semblance, a visage of fear, rage, despair, or other strong emotions. Those who save against the spell will be shaken and unable to tell friend from foe. They will make all attacks and saves at -1, and suffer a -2 penalty to morale. Those who fail a saving throw will be overcome by the emotion depicted by their masks. Typical masks and effects include:

Contempt: scorn and loathing for all present; will refuse any parley or collaboration and seek to part with them at the earliest opportunity
Despair: crushing sadness saps will to live; -2 to saving throws and initiative rolls
Euphoria: giddy delirium overloads the senses, even pain is delightful; -2 to AC, +2 to all damage taken during the spell
Mockery: convulsive laughter; -2 to attack and damage rolls
Rage: attack a random target each round at +2 to hit and damage
Terror: panicked; as fear spell.

These effects last for the duration of the spell. Other masks such as lust, gluttony and envy are possible, according to the player's ingenuity and the DM's discretion. This spell has no effect on mindless creatures.

Masque has one significant drawback: the caster must also make a saving throw each round of the spell's duration or suffer the effect of one of the masks.

Variants: Domino allows the caster to don a mask of his choosing and cause its effects by gaze, without being subject to them himself. Bal Masque creates an illusory retinue of 2-5 ghostly images surrounding the caster, each wearing a mask and causing its effects by gaze.

Bohren & der Club of Gore, from the album Black Earth. Check out a track from their forthcoming album Dolores, here.
Posted by Max at 11:18 PM No comments:

From now till Halloween, hoping I don't run out of bandwidth on my free file host, I'll be posting one of my favorite Halloween mixtapes, Weird Nightmare. Enjoy. 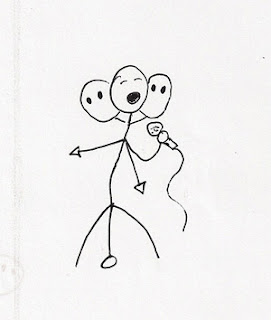 
Now appearing at the Fiend Follies, a supper club on the dark side of the moon. Two shows nightly.

Email ThisBlogThis!Share to TwitterShare to FacebookShare to Pinterest
Labels: gaming, other systems, tirapheg

As close to political as I'll ever get...

In the wake of Sarah Palin's stumbling interview with Katy Couric, the McCain camp accused Couric of "trap door" questions.

I'd be more confident in a Vice Presidential candidate that had the sense to pack a ten foot pole.
Posted by Max at 7:30 AM 2 comments: