Another excerpt from my Encounter Critical project, Gods From Outer Space, which matches handily with Jonathan of The Core Mechanic's RPG Blog Carnival. For those wandering by who might be unfamiliar, you can find a review of the gonzo gamer's wonderland that is Encounter Critical here. Visit the game's webpage here to download the game for nil, nada, zip, zilch, zero -- that's free, dig? 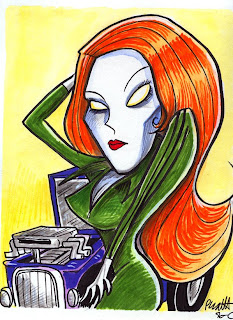 One of the least understood races of Vanth is the zombie. Symbiotic spores from space? A black magic curse spreading across the land? Cannibal spirits in human form? Or merely victims of a severe life deficiency? The answer is unknown -- as is often the case on the planet Vanth, seekers after the truth are advised to hedge their bets and mark their answer sheet 'all of the above.'

Despite common myth, it is known that they are not undead like vampires and mummies, since strictly speaking true zombies are never alive in the first place. Their curious biology has so far been impenetrable to scientific inquiry. They do not breathe and have no pulse yet they require sustenance and are as vulnerable to magic and disease as other humanoids. They breed true among their own colonies, but have been known to mate with all of the common races of Vanth.

Most Zombies dwell in the Holdings of their Unnamed Princess, who is said to be an ancient yet ageless Warlock. Her appetites at the banquet table and in the boudoir are legendary and strange. Her Holdings are notably rich, and caravans happily brave the Goblin Hills and the Empire of Darth Viraxis to trade with the zombies. Despite the fortunes to be made in the Princess's lands, the prudent merchant is never without a steel skullcap to discourage the wilder and more ravenous of her subjects.

Known as the Burial Playground of the Eastern Shore, the green and rolling coast of the Zombie Holdings is a vast cemetery. The hillsides are kept in perfect order, a tidy necropolis of stones and monuments from every faith and kindred stretching for fifty miles or more. Folks from every corner of Vanth come here to enjoy the beaches and bury their dead.

Ability adjustments: -1 DEX, -2 LEA, +1 ROB, +1 STR.
In addition a zombie gains +30% to Consume Alien Food, +15% to Survival, and +5% to Psi-Resist. All true zombies have the mutation Cannibal Urges; zombie hybrids have a 50% chance of this mutation. How assiduously they resist their hunger is up to the individual but it's worth mentioning that zombies must consume raw living flesh to properly balance their diets.

In some cases a non-zombie character may be resurrected as a zombie hybrid. For instance, a character with the Zombie Gene mutation will rise as a zombie hybrid if he or she is reduced to 0 Hit Points and survives. More rarely, a zombie rebirth might occur due to curse, affliction or necromantic locales. In these circumstances the JM might require the PC to adventure for a time as a simple living dead (HP 1-12, DAM 1-4, Save 10%, low Intellect) before achieving full zombiehood.