I considered writing this up for the short article I wrote for Fight On #2, but it's so strongly influenced by Julian May's Saga of Pliocene Exile that I didn't feel right publishing it under my own name. Nonetheless, what with all the goblin talk recently from Noisms and Ripper X, I thought I'd type up a variation of my own.

Though they are no stronger on average than ordinary goblins, omeneiros clans are usually found much deeper in the underworld than their kin. Hobgoblins shun them and even bugbears give them wide berth. Though they can be fierce fighters, omeneiros goblins defend their warrens mainly through cunning, craft and illusion. Shifting walls, strangely angled rooms and tricks of perspective distort distance and scale in their maze like lairs. A dwarf's knowledge of stonework is of use only 1 chance in 6 in these surroundings, and an elf is no better than the other races at detecting an omeneiros secret door.

Even more deadly to those who confront them is the omeneiros goblins' innate skill with illusion and fear magic. Intruders in the goblins' warrens must save vs. spells once per hour or be subject to disturbing waking nightmares -- half-seen visions and whispering voices which cause penalties to hit, damage and morale (as a curse spell). Furthermore, a group of seven or more omeneiros goblins radiates a panicking aura akin to a confusion spell: each round their foes must save or (2d6) 2-5 flee for one round; 6-8 do nothing, cowering in fear; or 9-12 attack the nearest creature, whether friend or foe.

Omeneiros goblin clans are organized along lines similar to their lesser kindred, with stronger subchiefs and guards according to their numbers. Larger groups are led by chieftains or clanmothers who cast spells as magic-users of up to 7th level in ability. Chieftains, clanmothers and the strongest warriors will be Fevercloaks, who go to battle girded with horrific illusionary bodies. Each takes on a unique visage -- serpentine spiders, huge jewelled scorpions, flayed ogres and grotesquely mutated goblin forms have all been observed. Fevercloaks attack as 3-6 HD monsters, doing damage by weapon type, though to all appearances they attack with the claws, fangs or stingers of their chosen form. 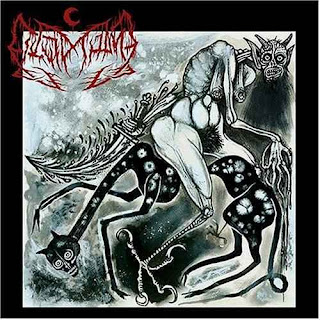 Those who behold a Fevercloak in its nightmare form must save vs. spells or be stricken with fear. Creatures under 2 HD will flee for 2-8 rounds, and be shaken even on a successful save, taking a -1 penalty to attacks and damage; those of more than 2 HD will be shaken only on a failed save (cumulative with the waking nightmare effect described above). If a Fevercloak hits with a natural 20 its foe must save vs. death magic or collapse in terrified paralysis, apparently dead as far as the victim's companions can tell.

When slain a Fevercloak reverts to its normal goblin form. In addition, they appear in their normal forms when viewed in a mirror. This may give a smart party the idea of attempting disbelief if confronted by another of its ilk. While the illusionary form will persist, disbelief will allow an additional save against the Fevercloak's fear effects.

In Cloaked form Moon-Eyes is a spindly horror, a shriveled goblin torso crawling on elongated spiderlike legs and arms. A drooling toothless mouth mumbles obscene limericks as he scuttles into battle. Huge cloudy eyes stare from a shrunken and malformed skull, and a pair of slashing chitinous mandibles thrust forth from enormously distended nostrils.

MP3: Leviathan, Vexed & Vomit-Hexed (Compact Disc, search "Tentacles of Whorror" - Download)
"Fear steals a voice / The price paid for dreaming / This is the cloud that lumbers across vision / A canopy of paranoia threatening light at its sting / Visions of existence appear and recede".