Adherer: "[T]he adherer will never attack a spider of whatever variety and sometimes it has been known to co-operate with them in trapping prey."

Androsphinx: "They usually shun the company of gynosphinxes, for they resent the females' greater intelligence and neutral alignment."

Annis: "These creatures have...been known to cooperate with such monsters as ogres, trolls, and evil giants for reasons of safety or better provisions..."

Aquatic Elf: "They are mortal enemies of sharks and sahuagin,....friends to dolphins and land elves, and neutral to all others, except for fisherman, who they dislike due to the number of sea elves snared in nets and killed mistakenly as sahuagin by these ignorant humans." (!)

Blink Dog: "There is a great enmity between blink dogs and displacer beasts and the two creatures will always attack each other."

Chasme: "Rutterkin are allied with chasme, although chasme are not fond of rutterkin and use them."

Crysmal: "Crysmals hate xorn as the latter prey upon them."

Dire Corby: "[A]t one time there was open warfare between them and giant bats, but this has now become an uneasy truce."

Drider: "Driders are outcasts from drow communities and thus bear them no great love."

Firefriend (Giant Firefly): "Humans and demihumans of friendly disposition are sought as companions...for firefriends love to converse with them and to hear stories of a fanciful nature."

Flind: In addition to sometimes leading bands of their cousins, the gnolls, "[flinds] are on friendly terms with orcs, hobgoblins, bugbears and ogres. However, they dislike trolls and will not co-operate with them."

Giant Harvester Termite: "The worst enemies of giant termites are formians, for formians are bigger and more intelligent, hate termites, and enjoy eating their eggs."

Goblin: "They hate gnomes and dwarves and will attack them in preference to any other creature."

Great White Owl (Arduin): They "are the arch enemies of Vords." I don't know what a vord is; it isn't told in Arduin Vols. I-III that I can find.

Grimlock: "Grimlocks rarely consort with other beings, though there is a small (10%) chance that they will allow medusae to share their lair, and a 2% chance that a wandering group of grimlocks will be accompanied by 1-2 mind flayers. For the latter reason, grimlocks are particularly hated by githyanki."

Grugach (Wild Elf): "They are completely xenophobic, distrusting even other sorts of elves."

Hybsil: "Bugbears, ogres, and especially gnolls are their mortal enemies."

Imix (Prince of Evil Fire Creatures) and Olhydra (Princess of Evil Water Creatures): "There is great enmity between Imix and Olhydra."

Kobold: "They particularly hate such creatures as brownies, pixies, sprites and gnomes. They war continually with the latter, and will attack them on sight."

Kuo-Toa: "[T]he dark elves provide useful goods and services as slave-traders and merchants, but the drow are both feared and hated by the kuo-toan people, so there are frequent kidnappings and minor skirmishes between the peoples. The illithids are greatly hated by the kuo-toans and they and their allies are attacked on sight."

Meazel: "The meazel is a traditional enemy of orcs and kobolds....Most creatures of the underworld will attack meazels, for they have a nasty reputation even among dungeon denizens."

Movanic Deva: "Plant life of any sort will not (and cannot) harm them. Similarly, normal animals will not willingly attack them. (Reptiles and similar creatures as well as 'monsters' may do so.)" The influence of medieval Christian bestiaries here, I presume, with the spawn of the serpent daring to bite the angel's heel.

Muckdwellers: "Muckdwellers have been known to associate with lizard men on rare occasions. They also have been reported serving kuo-toan masters."

Myconid: "[A]ccord has never been reached between fungoid and humanoid; each views the other as a disgusting threat, and population pressures in the limited underworld inevitably cause conflicts."

Perrinites (Arduin): These elf-dryad hybrids "can see and hear through their friends the birds," are "beloved of Ents," and "hate orcs and endeavor to lead such deep into the forest where they will get lost and be devoured by their friends the bears and other such large carnivores."

Pyrolisk: "Its mortal enemy is the phoenix, as the latter is immune to fire and detests Evil."

Qullan: "Qullans have never been befriended by human or near-human races; without exception, every encounter has seen the qullans attacking, irrespective of the alignment or size of the party."

Spectator: "If properly confronted, the spectator can be quite friendly. It will tell a party exactly what it is guarding early in any conversation so that there will be no argument! If its charge is not threatened it can be quite amiable and even talkative via telepathy."

Spriggan: "They hate only gnomes [their cousins] more than humankind, and they associate only with their own ilk."

Triton: "They have fought fierce wars with the sahuagin and skirmish continually with ixitxachitl, koalinths, and lacedons." 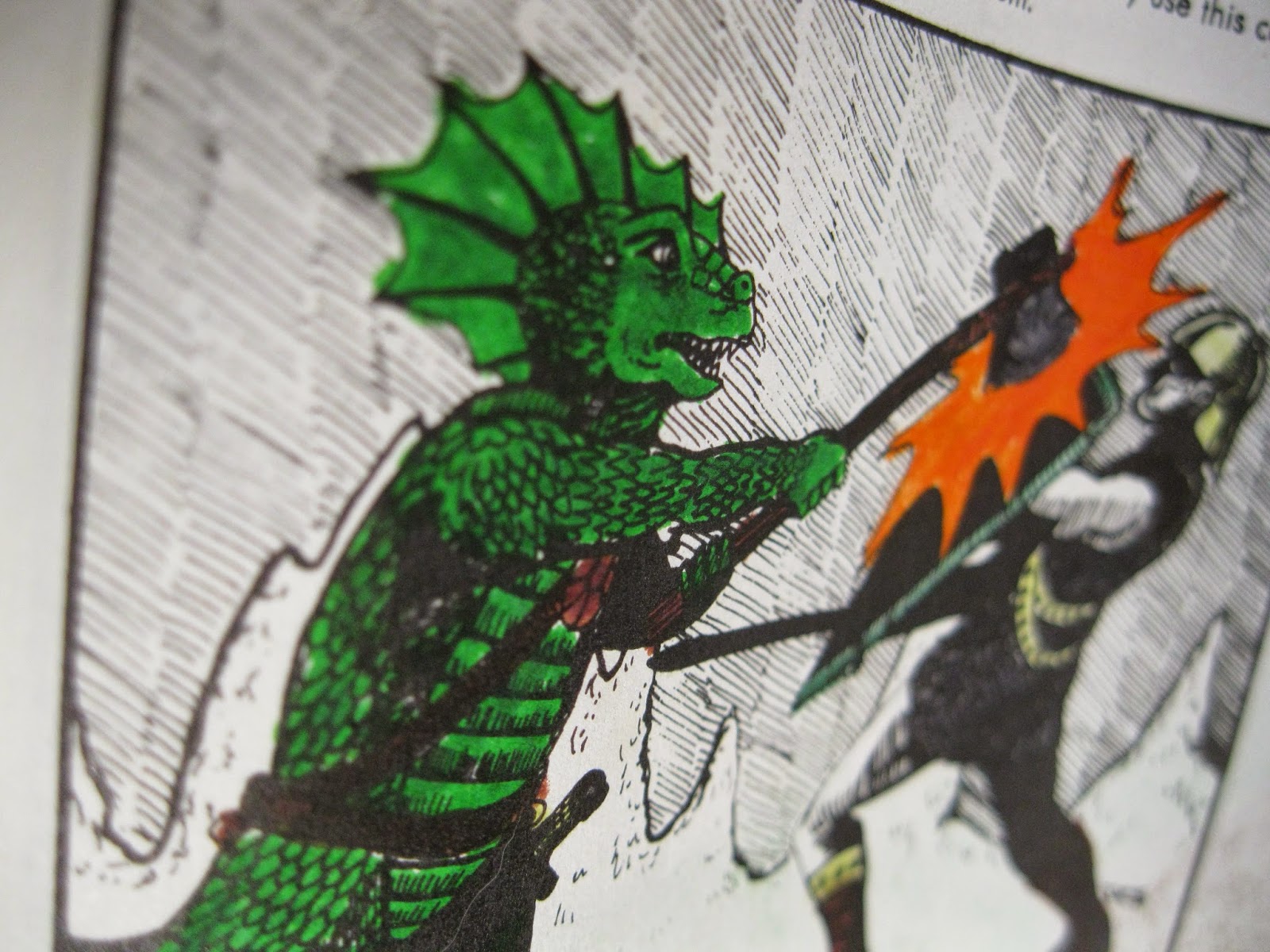 Troglodytes: "They loathe humans, and their aim is to slaughter all they encounter."

Valley Elf: "All other sorts of elves, including the dark elves (drow), shun valley elves. The latter, in turn, dislike association with any races save perhaps gnomekind, whom they tolerate."

Vulchling: "Vulchlings will consort with harpies or even Type I demons at times."

Wolfwere: "It must be noted that a great enmity exists between wolfwere and werewolves."

Xag-Ya and Xeg-Yi: "If a xag-ya and a xeg-yi should ever meet, they will rush together and destroy each other in a huge explosion..."

Elf: Perhaps unsurprisingly, none are so hated as the elves. Hobgoblins bear them a "great hatred" and orcs, who "hate living things in general, ...particularly hate elves and will always attack them in preference to other creatures." The shaggy quaggoths "have a particular hatred of surface-dwelling elves and have been known to become slaves of the drow in order to assist the latter in their warfare against elves," which seems a bit overkill, really. In Arduin, the Fang Wing (also known as "Warg Wings") "hate elves with a passion," and the deodanth just "hate elves so much they always attack them on sight." Likewise, and strangely, needlemen "appear to hate elves and will attack them on sight." Even plants hate elves. And for every player that never plays anything but elves, there's another who loves to mock them. There's probably a Cultural Studies paper to be written, but I'm too busy mining monster books for trivia.

(All quotations from the AD&D Monster Manual, Fiend Folio, and Monster Manual II or from The Arduin Grimoires Volumes 1-3. Illustration David C. Sutherland III, colored by Max the Younger)

A Vord is a Hawk Like bird, Has Green Beak, Claws and Eyes, Claws contain paralysis venom