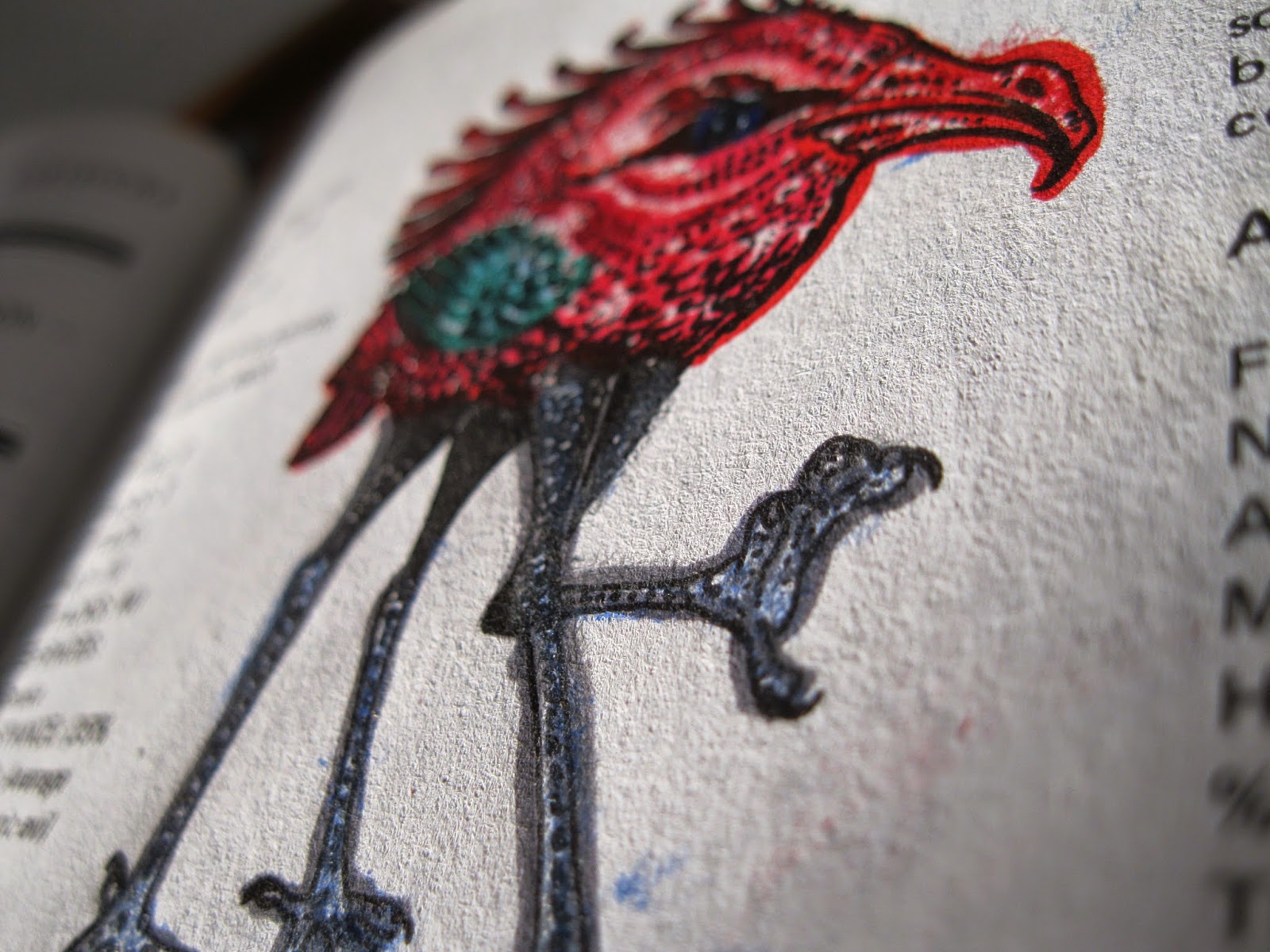 Achaierai: "Though the foul motives which caused these loathsome birds to be first summoned from the infernal depths are now lost from memory, remnants of the original achaierai flock still stalk the earth..."

Bulette: "The bulette (or landshark) was thought to be extinct until recently when this horror reappeared. It was the result of a mad wizard's experimental cross breeding of a snapping turtle and armadillo with infusions of demons' ichor."

Catoblepas: "Perhaps its habitat — fetid swamps and miasmal marshes — caused the bizarre combination of genetic characteristics in this monster, or perhaps it was due to some ghastly tinkering with life by a demented godling."

Death Knight: "The death knight – and there are only twelve of these dreadful creatures known to exist – is a horrifying form of lich created by a demon price (it is thought Demogorgon) from a fallen human paladin."

Derro: "The derro are a degenerate race of dwarf-like stature, possibly a cross between evil humans and dwarves."

Dragonne: "A weird cross between a brass dragon and a giant lion..."

Gnoll (Rules Compendium): "Gnolls are rumored to be the result of a magical combination of a gnome and a troll by an evil magic-user." 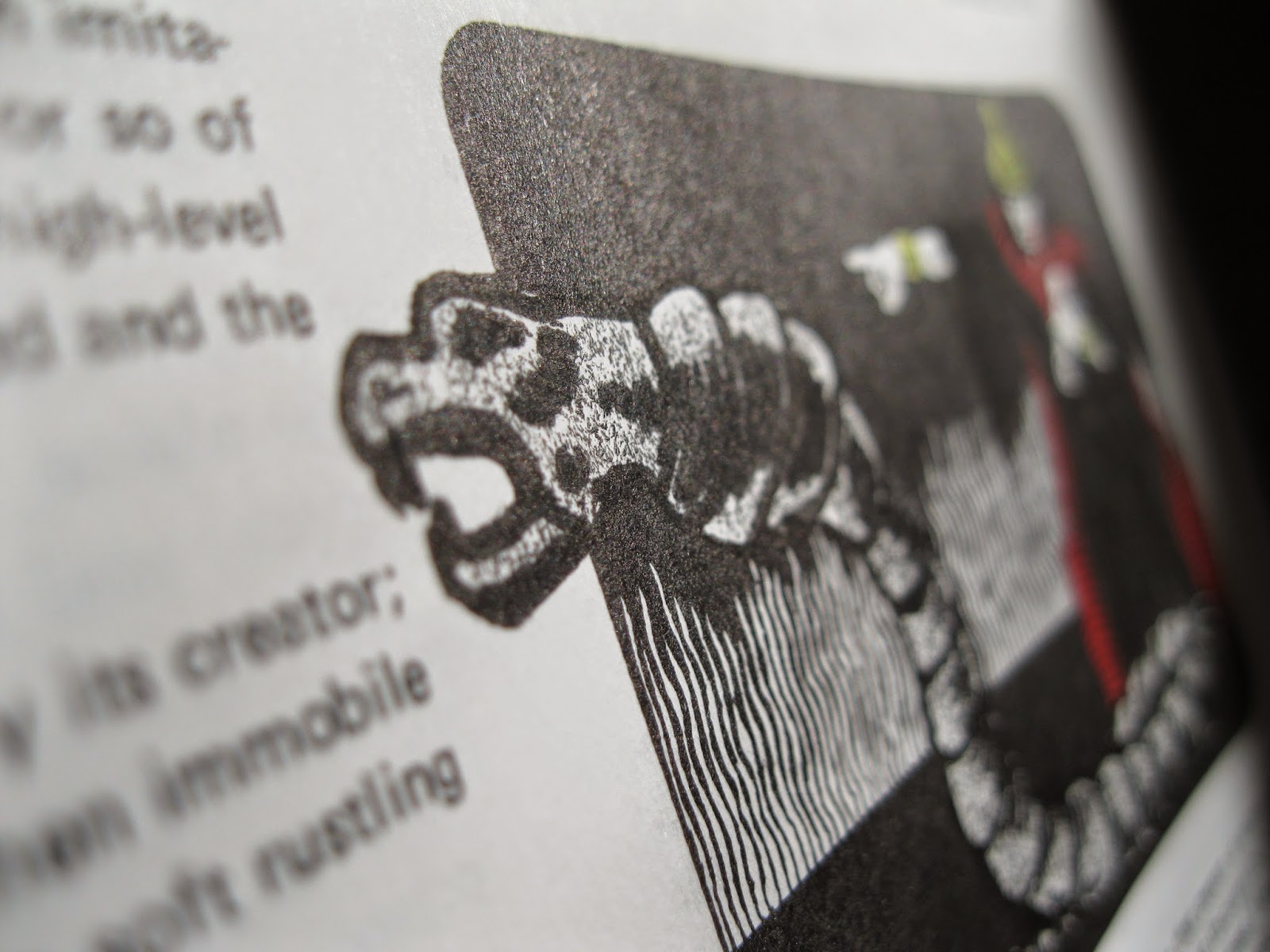 Iron Cobra: "The invention of some great magic-user or minor deity, this segmented automaton is made of an unknown metal and shaped in imitation of a snake."

Killer Frog: "They are man-eating, specially bred mutants" created by (per Supplement II: Blackmoor) "a 'religious' order...[which] delved into the forbidden areas of study and determined that animals have more potential to populate the world than man, who was, after all, a biological abomination which would ultimately threaten the existence of all life....Combining the natural animals available with each other — through the use of biological mutations and methods discovered in old manuscripts — the Brothers began developing the killer frogs of the swamp."

Lava Children: "They are the unnatural offspring of a union between spirits of earth and fire."

Magnesium Spirit: "It is believed that only three or four of these creatures exist, having been summoned originally to the Prime Material Plane, and stranded there, by an evil magic-user who died as a result of the strain of the summoning."

Minimal: "They were (and possibly are yet) created by means of spells similar to those that were so successful in creating giant reptiles, insects, amphibians and the like." (!)

Monsters of Palladium Fantasy: Even among high fantasy worlds, Palladium is unusually crowded with things born of insane tinkering, reckless summonings, and long forgotten curses. The ass-headed, peacock-tailed adram is probably "the result of some ancient, misbegotten enchantment," and the bearmen of the north of "some magical experiment gone awry." The three-headed beast dragon is thought to have been conjured to fight for one side or the other in the dwarf/elf wars, though "[n]either elf nor dwarf has ever taken credit." We've barely started the alphabet yet.

The harpies, rumor has it, were unleashed by the tantrum of a crabby high priest and his petulant deity. The loogaroo might be accursed witches. The immortal scarecrows were "originally created two hundred years ago by an insane diabolist/alchemist.... Hundreds were created as an army before the madman was slain."

Also thought to be spawned by the conjury, perverse husbandry, or summoning of wizards, diabolists, alchemists, et alia: black jelly and green mold, the chimera, the pegasus and the peryton, the lizardoid eandroths, the grotesque maxpary, the sundevils, and the fell Worms of Taut.

Mud-Man: "Mud-men are formed in pools of mud where enchanted waters (even mildly enchanted ones, such as a stream eroding a magical structure) collect and evaporate and concentrate the dweomer." Hmmm, concentrated dweomer. Like, if the enchanted pond or whatever dries up could you glean dweomer like salt crystals?

Owlbear: "The horrible owlbear is probably the result of genetic experimentation by some insane wizard."

Peryton: "[L]ikely the result of the same type of experimentation as brought about the owlbear."

Quickling: "These small, slender, extremely fast-moving creatures are said to be a race of brownies who dabbled in magic and mysteries better left alone. Thus, legend relates, the little folk were changed into evil creatures of great maliciousness..."

Quickwood (Spy Tree): "It is said that the quickwood grows only through the magical offices of some great wizard (or possibly druid) who planted a mandragora root after ensorcelling it with mighty spells. Others claim that these weird trees are a natural progression of vegetable life towards a state equivalent to man's."

Retriever: "Retrievers are constructed by Demogorgon in his laboratories in the Abyss..."

Sahuagin: "The exact origin of the sahuagin is unknown. It is suggested that they were created from a nation of particularly evil humans by the most powerful of lawful evil gods in order to preserve them when the deluge came upon the earth. The tritons, however, are purported to have stated that sahuagin are distantly related to the sea elves, claiming that the drow spawned the sahuagin."

Shade: "All knowledgeable authorities agree that shades are, or were, normal humans who through arcane magic or dark sciences have traded their souls or spirits for the essence of shadowstuff....The method of transmuting from living being to unliving shade life has been lost."

Shock Bones (Arduin): "These are the practical joke of the mad techno 'Dirty Harry' and have fooled several very smug clerics."

Skeleton Warrior: "It is said that the skeleton warriors were forced into their lich-like state ages ago by a powerful and evil demi-god who trapped each of their souls in a golden circlet."

Sons of Kyuss: "Kyuss was an evil high priest, creating the first of these creatures under instruction from an evil deity. Since then the 'sons' have increased considerably in numbers."

Spirit Troll: "This odious creature is the product of perverted magical inter-breeding of trolls and invisible stalkers, thought the secret of its creation is lost and only thirty or so of these creatures are known to exist."

Stegocentipede: "It is probable that stegocentipedes developed on some far removed parallel world or were the creation of some insane genetic manipulator."

Teleport-Rose (Arduin): "A magikal creation usually conjured by a magician for a special reason."

Thoul (Rules Compendium): "A thoul is a magical combination of a ghoul, a hobgoblin, and a troll."

Vision: "Misguided research by a high-level illusionist (which led quickly to his death) created the visions – summoned beings which appear as shadows."

Wizards of Mystara (Rules Compendium): Upon reaching name level, an independent magic-user "may build or seize a tower....After the magic-user moves into his tower, he may choose to build a dungeon beneath or near it....If, once one or more levels of the dungeon are completed, the wizard leaves an unguarded opening into the dungeon, monsters will be attracted and will build lairs." Perfect.

(All quotations from the AD&D Monster Manual, Fiend Folio, and Monster Manual II, the Arduin Grimoires Volumes 1 and 2, Palladium Fantasy's Monsters & Animals and the Rules Compendium. Achaierai by Russ Nicholson, Iron Cobra by Alan Hunter, both colored by Max the Younger. The Wizard's Shotgun by K.C. Green.)