Rumor Has It That The Truth is Hidden

I like it when monster books include rumors and wild speculations about the origins, powers and goals of monsters. There's certainly room for a bit of Greenwoodesque cryptozoological minutia, but with too much explanation I think you end up losing some of the essential weirdness of a world full of monsters. Not everything about a monster needs to be known! Suggesting—alongside a monster's statistics, description, detailed summaries of its arms and armor, its alliances and hatreds, its favorite foods, etc.—that some of what's believed about it might merely be conjecture or legendry gives a monster life beyond the text itself.

Aboleth: "There are reports of huge underwater cities built by the aboleths and those they enslaved. But these reports, along with the stories of their vast stores of knowledge, have never been proven."

Death Dog: "These vicious hounds...are said to be the descendents of Cerberus; their loud penetrating double bark tends to lend support to this theory." Uhhm...if you say so my dude. I mean, doesn't a double bark just prove they have two heads? 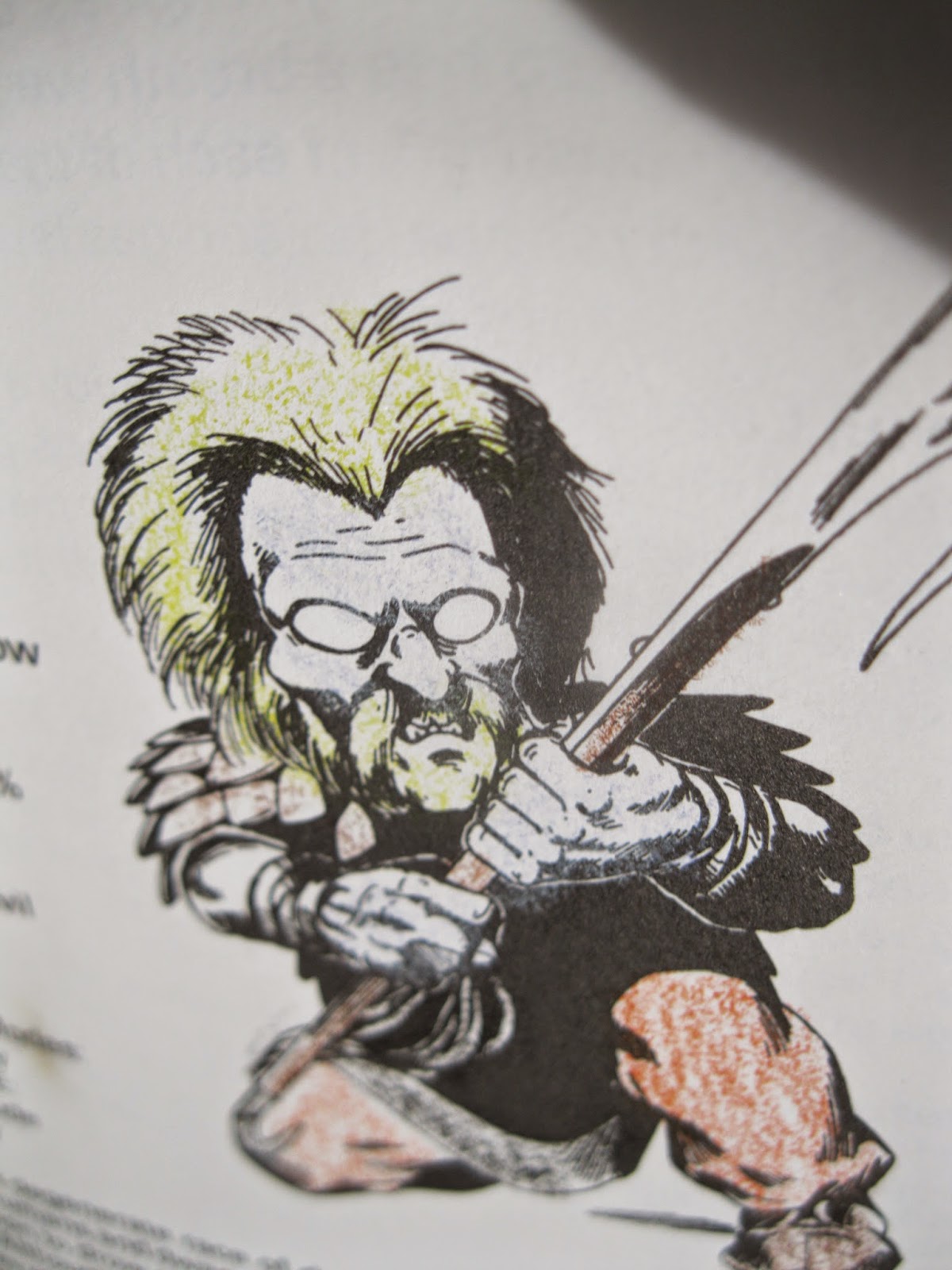 Derro: "[T]hey venture out upon the surface of the earth at night through secret shaft openings to steal and kidnap humans for slaves. Rumor says that some humans are actually eaten as well....The derroes are said to have a major stronghold somewhere deep beneath the ground, and there their savants plot and scheme to devastate the upper world and enslave all mankind." These rumors were conclusively proven by Richard Sharpe Shaver, but he, like the Flat Earthers and Room 237ers after him, has gone sadly unheeded.

Elementals: "On the elemental plane of earth there exists a boss rumored to be of astounding size." "The ruler of all fire elementals is reported to be known as the tyrant." "It is possible that [the water elementals] are ruled by a god-like king." That the air elementals have a queen who is "both powerful and has certain magical abilities" does not, according to the text, seem to be in any doubt.

Eye of Fear and Flame: "It is said that the eyes of fear and flame were either created by the chaotic evil gods for the destruction of lawfuls, or by the lawful/neutral gods for their testing. The truth is hidden. It is rumoured that only about twenty of these creatures exist."

Fire Snake: "It is conjectured that fire snakes are larval salamanders."

Frost Man: "To date, these creatures have only been encountered singly and the location of their lair, its type and their pattern of living are unknown. It is thought that there are villages of frost men, with females and children, buried in deep caves in mountains, mainly in cold regions. None have yet been able to establish the veracity of these rumours."

Guardian Familiar: "Its means of summoning, though they involve the casting of the find familiar spell, are known only to a small group of arcane magicians (and those few who they train in their specialist art) and are believed to involve bargaining with the denizens of the Outer Planes on which the guardian familiars dwell."

Harpy (Palladium Fantasy): "Although no religion admits to it, it's suspected that the harpies were the creation of one of the gods. Legend has it that a high priest, vexed at a petty crime, called down a great curse. The god responded, irritated and vengeful, with a plague of harpies....There is a second part of the legend that says when the high priest is destroyed, the harpies will be banished. However, the unknown cleric would have to be pretty old since harpies have been known for hundreds of years."

Kappa (Palladium Fantasy): "These malicious little creatures were once believed to be water sprites, but it is now known to be a strange, semiaquatic race said to be older than elves." From legend to fact to speculation in one world-building sentence. Only a nominal similarity to the kappa of Japanese folklore, by the way. These are little crab-hand dudes.

Kraken: "It is said that at one time these creatures were smaller, lived in shallow coastal waters, and had human worshippers who served them and brought them sacrifices." 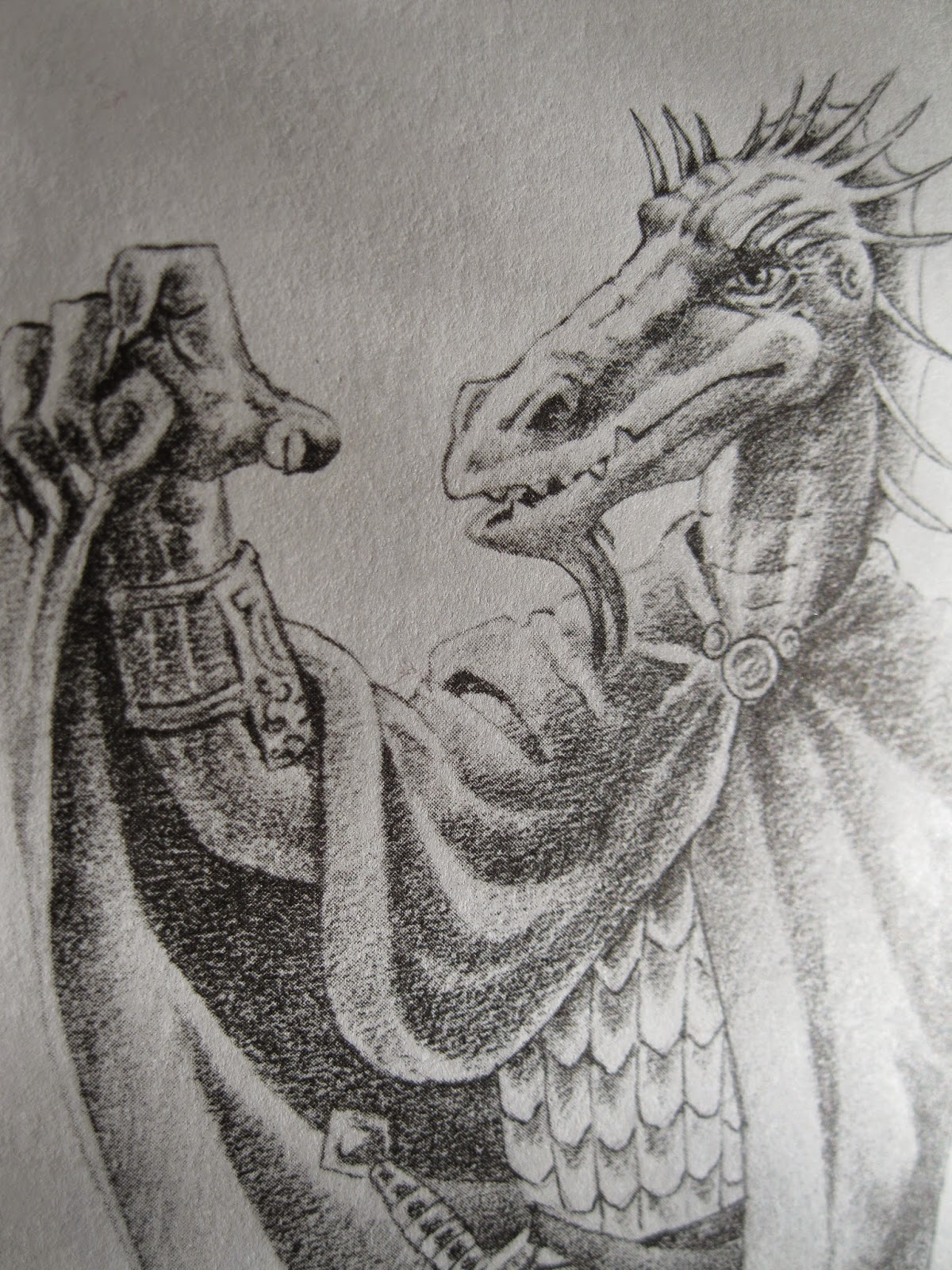 Leprechaun: "Rumor has it leprechauns are a species of halfling with a strong strain of pixie."

Lizard Mage (Palladium Fantasy): "Rumor has it that the lizard mages were among the first rulers of the Palladium World....A separate claim has it that they created the race of elves! Certain cults actually take this nonsense seriously."

Minotaur (Palladium Fantasy): "The minotaurs were probably wandering vegetarians at one point. Large fields of bones in the Baalgor Wasteland testify to some concentrated effort to wipe them out." Driven into mazes and dungeons by range wars and overgrazing?

Pech: "No one knows what the pech actually are, or whether they are from the Prime Material or Earth Planes."

Quaggoth: "Little is known of these great white shaggy bipeds. Some say they once formed a warlike cannibal race – their aggressiveness is unquestioned."

Sea Serpent (Palladium Fantasy): "Folklore says that the dark forces that rule the Land of the Damned nurture and breed sea serpents to guard its northern coasts."

Shocker: "It is quite clear that this creature does not have its origin on the Prime Material Plane, though its purpose in visiting that plane has not been divined; some say it is from the Negative Material Plane while others postulate the existence of an Electromagnetic Material Plane coterminous with all three Material Planes and the Elemental Plane."

Spriggan (Palladium Fantasy): "Their apparent mission in life is to erect large slabs of stone in a multitude of circular patterns....Why they build these pillars and stone-henge like circles is a mystery even to the Spriggans, who do what they do 'because!'"

Sussurus: "The sussurus is believed to have a life-span of over 1,000 years."

Triton: "Tritons are rumored to be creatures from the elemental plane of water which have been planted on the material plane for some purpose presently unknown to men."

Whale, Narwhal (Rules Compendium): "It is rumored that their horns vibrate in the presence of evil."

Displacer Beast (Rules Compendium): "It is suspected that displacer beasts and blink dogs both come from some faraway plane of existence, and are at war with one another throughout the dimensions." What.

(All quotations from the AD&D Monster Manual, Fiend Folio, and Monster Manual II, Palladium Fantasy's Monsters & Animals and the Rules Compendium. Derro by Jim Holloway, colored by Max the Younger; Lizard Mage by Kevin Siembieda; Blink Dogs at a kill by David A. Trampier.)