Arduin frequently includes a mention of a monster's "favorite food" and I'm honestly so charmed by that. I vow henceforward to add Favorite Food to monster stat blocks whenever possible.

Annis: "These giantesses are particularly fond of human flesh; however, so voracious is their appetite, they will devour even so rank a beast as a stench kow."

Apsis: "Blood is a preferred drink amongst them."

Bulette: "[T]hey dislike dwarf and will shun elf of any sort. They love halfling and will hungrily dig them from their burrows."

Cave Fisher: "[A] cave fisher's blood...also contains a lot of alcohol." Making them, perhaps, the prey of dipsomaniacal trolls and ogres?

Crabman: "Crabmen are often subjected to raids by sahuagin who consider them a tasty delicacy."

Crysmal: These creatures "[p]articularly [favor] quartz, beryl, corundum, and carbon crystals" and "will often attack in order to gain these minerals."

Demons of Arduin: Many a demon of the Arduin Cycle has a favorite food. Wind demons crave elf meat, "which they love dearly." Ice demons prefer amazon, and sea demons like mermaid meat. Fire demons love elf hearts; earth demons prefer ent hearts. The hell cats' favorite food is blink dog. The demon locusts "are true omnivores, and will eat anything from flesh to steel!"

Disenchanter: "The creature has the power to detect magical dweomer – from magical armour, shields, swords and the like – on which it feeds, drawing its sustenance on the powerful enchantments such items carry."

Drider: "Their diet consists mainly of the blood of their victims, as they have acquired a spider's tastes."

Faerie Dragon: "[They] eat fruit, roots, tubers, nuts, honey, and grains and may go to great lengths to get a fresh apple pie."

Giant Strider: "These birds are immune to fire, magical or otherwise, and in fact their bodies have adapted to derive sustenance from warmth."

Gold Dragon: "[They] use jewels and pearls as nourishment."

Griffon: "If they come within sighting or smelling distance of horseflesh, the griffons will wing to the hunt."

Hobbitt (Arduin): Hobbitts themselves have a "happy, hungry" temperment [sic] and are "always eating." If they aren't careful though, they are often eaten; they're the favorite food of black and white striped dragons, kill kittens, pybras, red fangs, and the Demon Lord Kavring.

Lizard Man: "They are omnivorous, but lizard men are likely to prefer human flesh to other foods. In this regard they have been known to ambush humans, gather up the corpses and survivors as captives, and take the lot back to their lair for a rude and horrid feast."

Luck Eater: This Borgesian cat-creature causes companions it has charmed with its purr to suffer a -2 penalty on all saving throws, damage, and chances to hit. Via some metagame process, "[t]he luck eater somehow feeds on the luck thus lost," liter(arily) feeding on dice rolls.

Magman: "The molten rock of the Prime Material Plane has a different 'taste' from that on the Plane of Heat, and the magmen like to visit it to absorb its essences."

Ogre: Are "very fond of halfling, dwarf, [and] elf flesh."

Peryton: "Human hearts are the type most sought by perytons," though it isn't certain that they're for eating; the peryton tears out its victim's heart, we are told, because "[t]he organ is necessary to the peryton in order to reproduce." 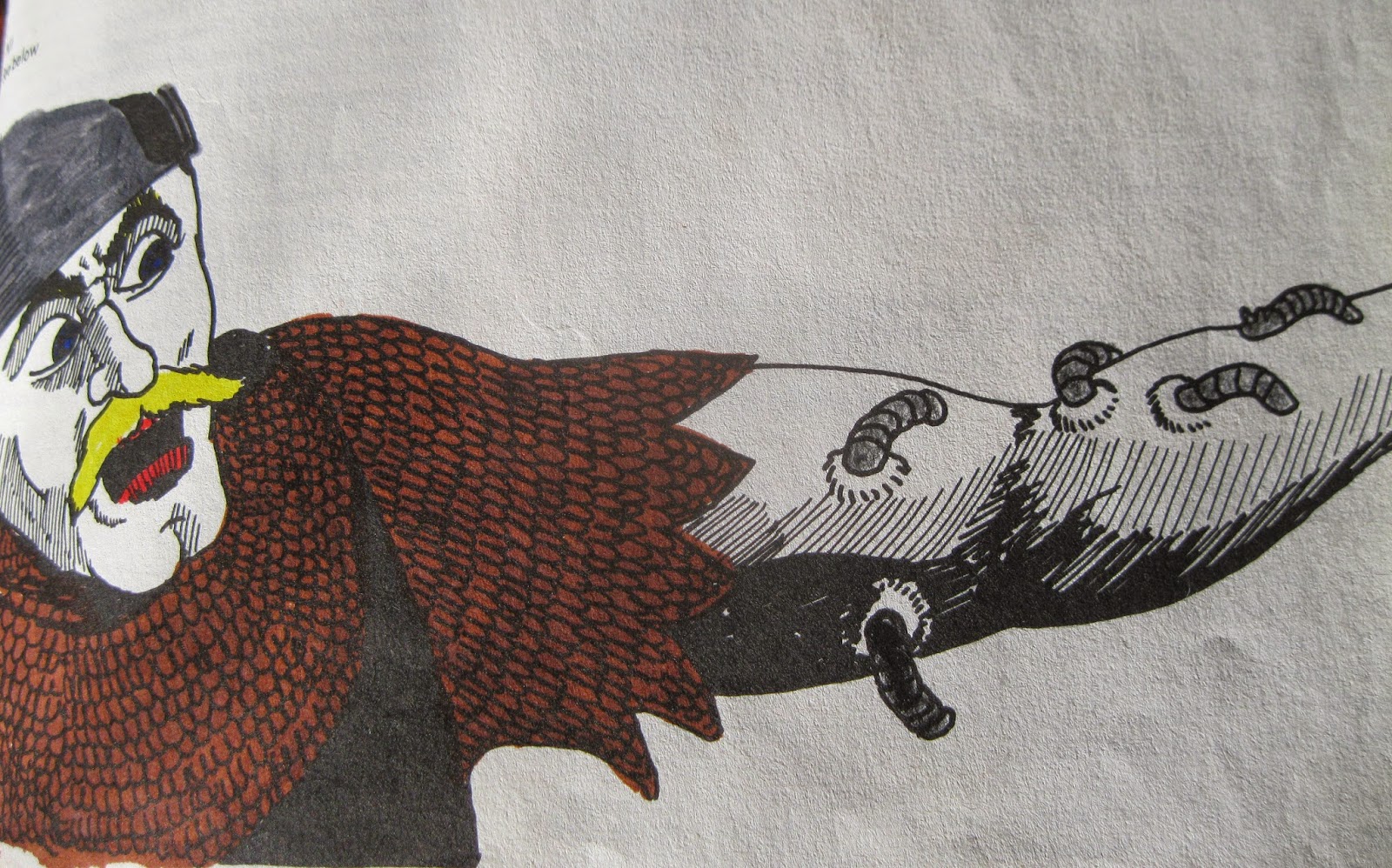 Rot Grub: "These small creatures will viciously burrow into any living flesh which touches them, for they greatly enjoy such fare to dine upon." Unless killed by fire or spell, "the rot grubs will burrow to the heart and kill their host..."

Symbiotic Jelly: "To obtain sustenance it must drain energy (which it can do remotely in a fashion whose means defy investigation) from a carnivorous creature – any monster [native to the Prime Material Plane save the undead] which rends flesh – at the same time as the monster is itself eating."

Thunder Beast: "[T]hey feed many of the other creatures likewise inhabiting the [Abyss]. Their flesh is rank, fibrous, and disgusting to all but demons and their ilk—and possibly even to them!"

Xaren and Xorn: "Xorn feed on certain rare minerals which are the subject of their quest on the material plane....The xorn is likely to demand such metals as copper, silver, etc. to snack upon..." The xaren favor "iron, copper, silver, gold and electrum (in that order)" and gain extra hit points by consuming magical metals (magic weapons, armor, etc.). They "crave magic metal and will be eager to obtain it. They are intelligent enough to realize the relationship between magical metal and their health."

Yeth Hound: "They will devour any warm-blooded prey but vastly prefer demi-humans, brownies, and the like." Who doesn't like warm brownies?

(All quotations from the AD&D Monster Manual, Fiend Folio, and Monster Manual II or from The Arduin Grimoires Volumes 1-3. Gryfylisk by Michi Okamura. Rot Grub and Giant Toad by David C. Sutherland III, colored by Max the Younger) 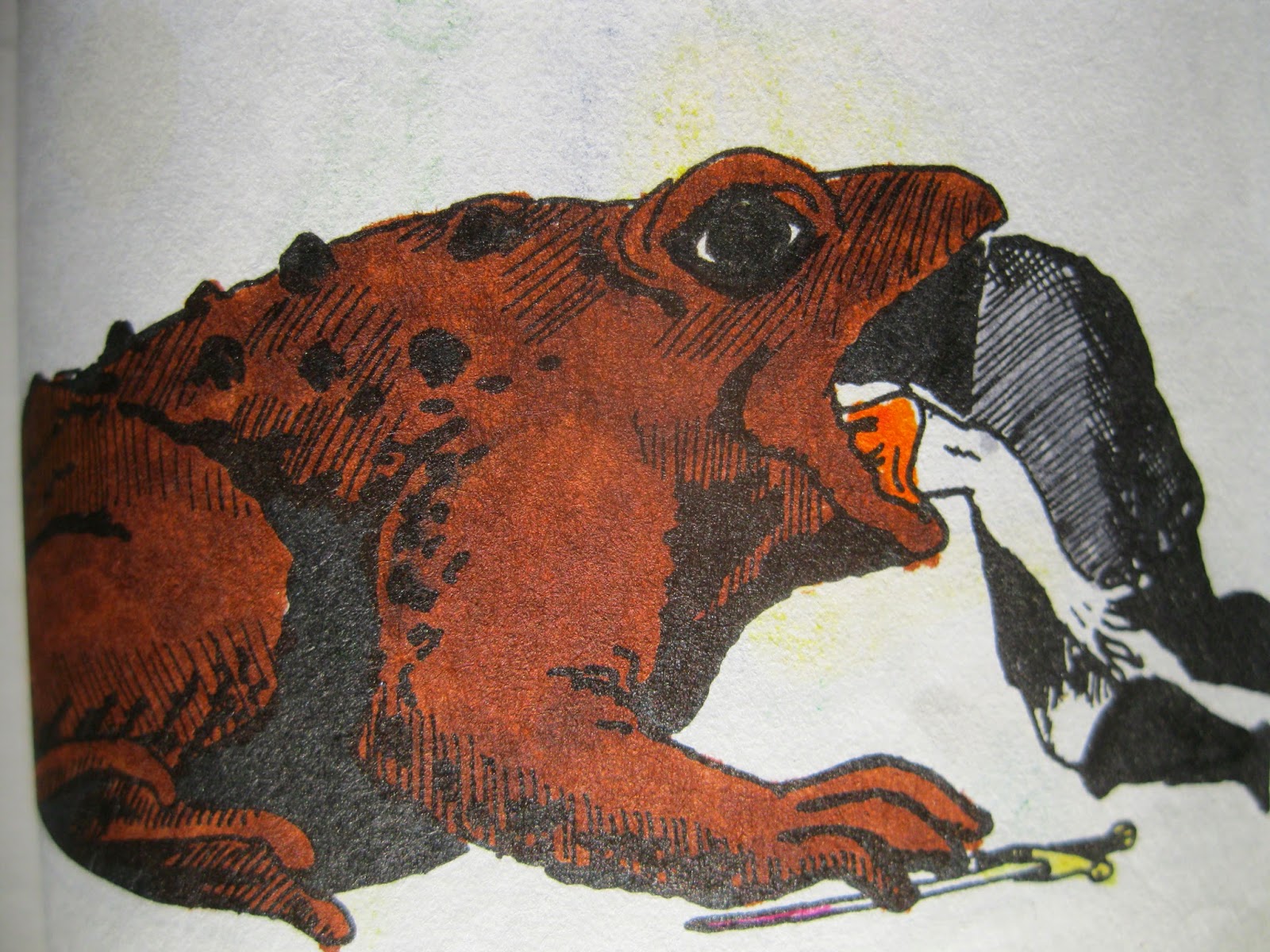 Hear This: Pancakes? Ice cream? French fries, hamburger? What's your favorite food? You gotta eat if it chokes ya.